Detroit: Not Yet Seen

Data for Black Lives is a movement of activists, organizers, and mathematicians committed to the mission of using data science to create concrete and measurable change in the lives of Black people. Our blog aims to provide insights into our work by highlighting our research, organizing, and policy updates across all branches of our organization.

Our Detroit Hub shares an update on failed efforts to enshrine equity in their city’s constitution and plans to move forward.

Read in full on the blog 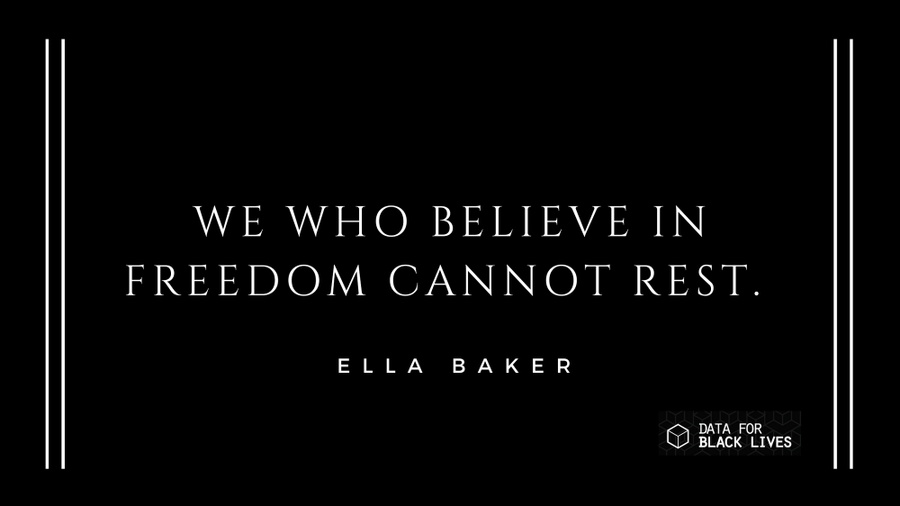 Detroiters are visionary resisters who have consistently embodied the Ancestral motto “make a way out of no way,” but the stench of despair lingers in the air around certain neighborhoods. Mass evictions and water shutoffs are hanging over the heads of thousands of residents. Environmental racism is amplified with each heavy rain. And while the same homes are flooded over and over again, zero accountability follows for the architects who privatized the city’s water infrastructure years ago. The head of the Great Lakes Water Authority recently resigned, but the impact of GLWA’s negligence is insurmountable. And while the energy company in Detroit was helping to fund a massive disinformation campaign against one of Detroit’s most progressive efforts at democracy, it was shirking its duties to ensure infrastructure does not fail during storms.

Thousands of Detroiters have consistently organized for reprieve from city government inaction, while the evolving and mutating COVID crisis continues to wipe out more of our family members and friends. As of August 8, 2021, Black residents in Detroit still account for nearly half the COVID related deaths in Wayne County, which contains 33 other cities and townships. The maps below show the COVID death toll in Detroit, and then for the other 33 cities and townships in Wayne County. 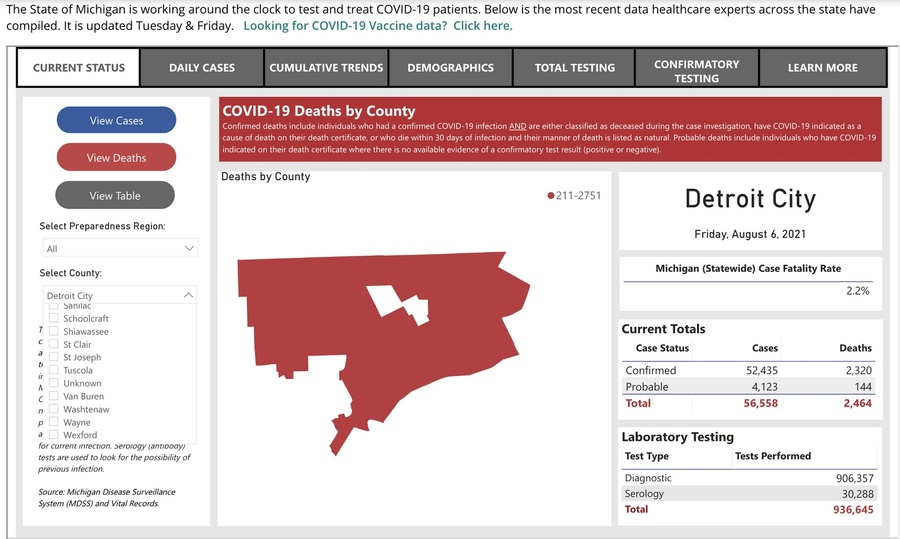 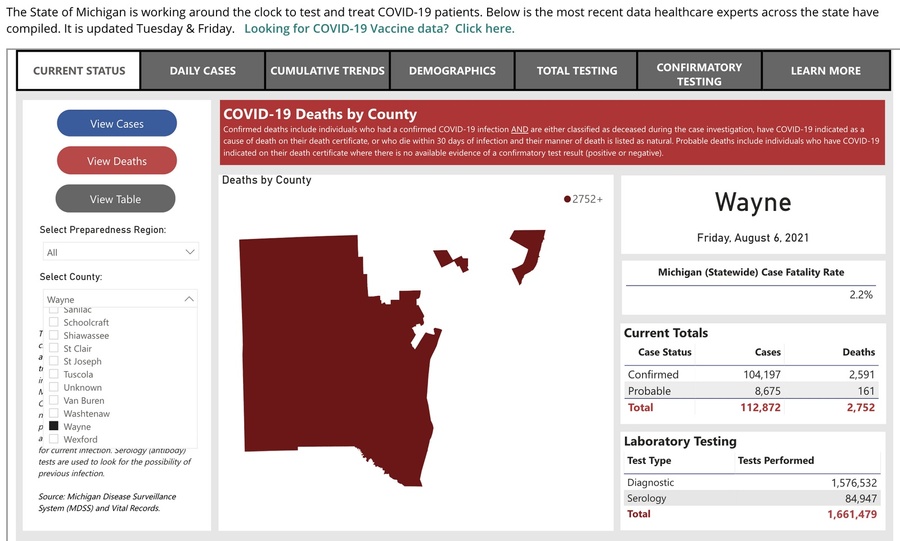 After months of legal battles seeking to remove Detroiters’ right to vote on the proposed revised charter, advocates were hopeful when the MI Supreme Court ruled to defend democracy.

Proposal P promised power and progress for the residents of Detroit, but it was no match for the decades long propaganda machine that would convince over 60% of the less than 15% of primary voters to vote it down. Years of work, hundreds of hours of critical debate and research, and dozens of meetings put forward one of the most historic charter revisions in Detroit history. It was devastatingly defeated under a sea of dark money funded billboards, news media editorial hit jobs, hourly commercials, mailers, text messages, signage from the city to the suburbs and flyers dead smack in the middle of every non-related article people read on their computer or cellphone. I even tuned in to Hulu to watch a movie and found a “Proposal P is a Problem,” advertisement waiting for me. The campaign to destroy Proposal P was relentless and well funded. 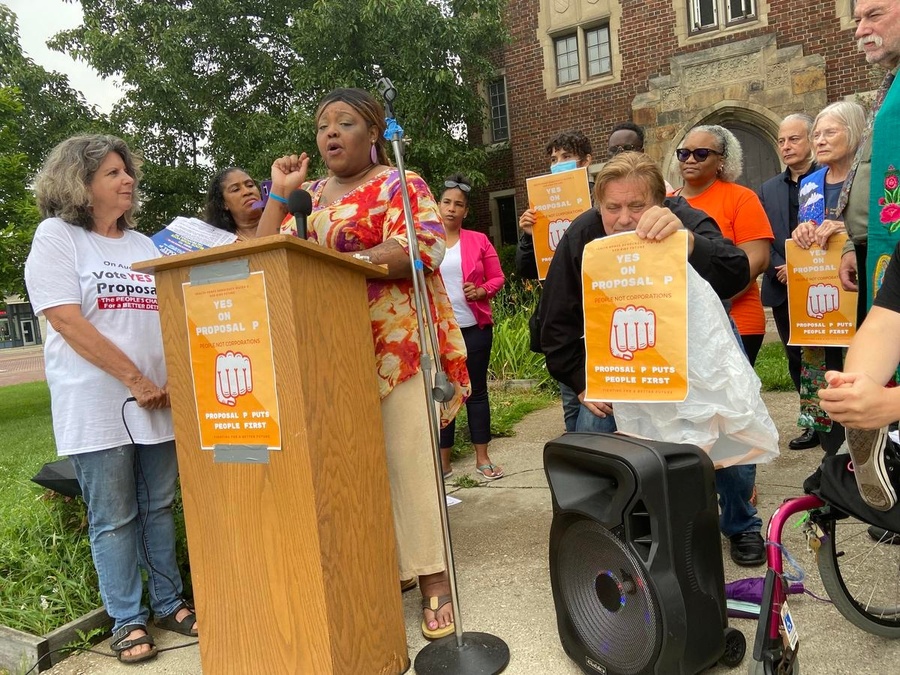 In Detroit: On a Journey to Be Seen I described the organizing around the Detroiters’ Bill of Rights. Dozens of social justice organizations, hundreds of impacted residents, and some city officials engaged in numerous meetings with the charter revision commission. We responded to the decades-long call from Detroiters demanding to be seen. Demanding that their city government work for them. Proposal P was real hope for a new, more racially equitable Detroit.

In the words of Professor Peter Hammer, “As public money is diverted to private projects, Detroiters are told to be patient. They are told that the benefits will ‘trickle down’ to them over time. In truth, these benefits remain tightly controlled in private hands. Little is trickling down anywhere.”

Those of us who sat in on those meetings, sometimes from 5pm to midnight, knew that we were holding the weight of the city on our shoulders. We knew that we were privileged to be able to sit on the computer for a third of the day, multiple times per week during the height of a pandemic. We knew that we were fighting for access to broadband internet while tens of thousands of Detroit children go without it and are missing from virtual school every day. An impact that will no doubt affect young people in Detroit for years to come. We knew that whether we succeeded or failed, the results would be replicated across smaller Black cities and townships across the United States. We are already seeing pockets of Detroit’s mass surveillance policies being rolled out in other cities. Despite the fact there is no evidence that Project Green Light creates safety for residents, city government continues to tout its pay for policing program, which prioritizes businesses with priority one police response, as a model for the world.

Proposal P wasn’t just a ballot initiative, it was an opportunity for Detroit residents to show that we could make government accountable to the people and that self-determination is paramount to the dignity and humanity of thousands of families in the city. It was an opportunity to enshrine basic human rights and racial equity into the city’s constitution, to hold oversight bodies accountable for oversight, to remove military weapons from law enforcement officers, to put real checks on mass surveillance and to ensure that no family went without internet access, water, housing, recreation, or meaningful work. It was designed to keep corporate welfare in check and to ensure that tax dollars benefited residents. Proposal P was an opportunity to put people over profit. Although we attempted to counter the flood of bad press against Proposal P, our collective efforts fell short.

Thousands of these flyers created by Detroit People’s Platform, were distributed door-to-door and at polling places. 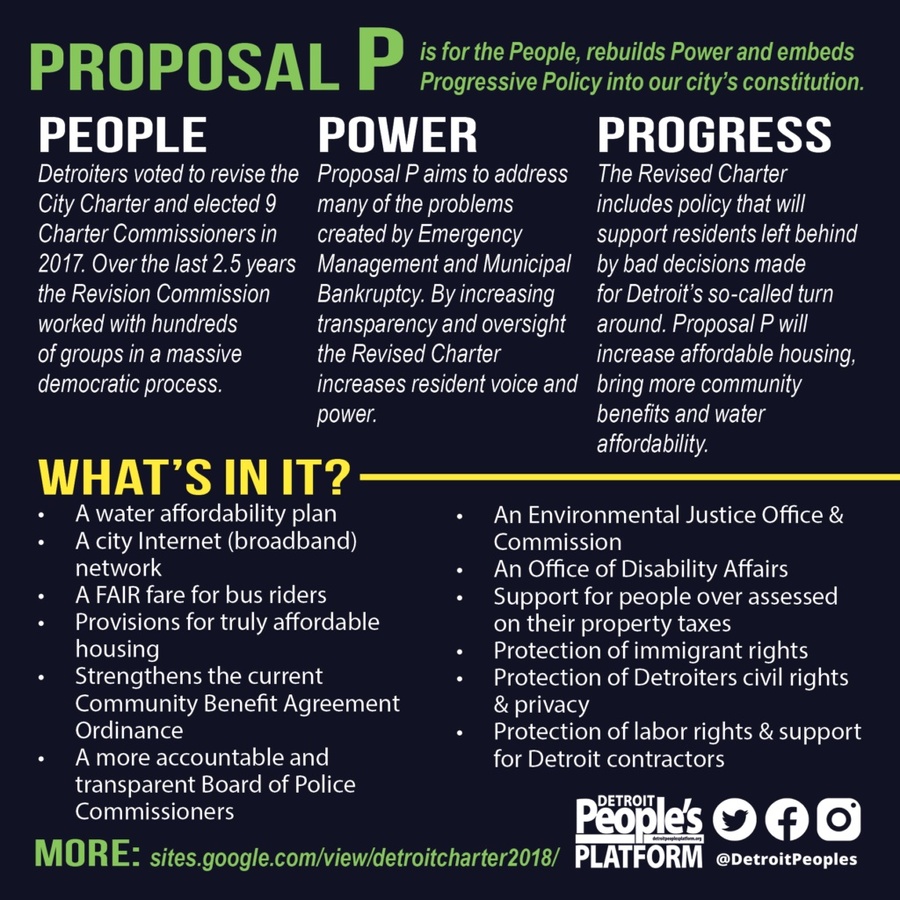 As much as I teach about the half-century long propaganda assault on Detroit and its impact on the political landscape during my antiracism workshops, I must admit that this recent loss deflated me. It also deflated many in the city. Several residents told me that they don’t even want to vote anymore. That this opportunity was their last hope at pursuing relief through electoral politics. I can’t say that I blame them, but I do hope I was able to encourage them to hang in there.

The rights we hoped to enshrine in the proposed revised charter were direct responses to the plight of Detroiters. They were provisions drafted by those who suffered the impact of inequity directly. Those who funded the war against Proposal P will likely never experience the impact its failure will have on the quality of life in Detroit. They will continue to receive their corporate subsidies, suck up resources from cash strapped communities and expand upon their wealth while residents suffer.

We still have a chance to turn the tide in our November election. Two charter revision commissioners are running for political office, and a progressive mayor who has spoken out against mass surveillance and in support of Proposal P, will also be on the ballot.

Although we lost against a massive propaganda campaign that tapped into the fears of many Detroiters, it is still my hope that the power of the people will prevail in the end. We won’t have another opportunity to amend the city’s constitution until 2034, but we plan to continue our visionary resistance on the ground and hold elected leaders accountable to the promises that got them elected.

Learn about the disparate impact that Black and Brown communities in the DMV have been facing as a result of COVID-19, highlight the work that local DMV organizations are doing, and provide ways for people to get involved. Featured panelists: Carmen Daugherty, Policy Director at Youth First ...

Defeating Jim Crow required an army of lawyers and a national legal strategy. But new forms of racism and oppression demand new forms of activism and resistance. And scientists are answering the call. From academics and professional researchers to the everyday citizen scientists among us, people ...

Our DMV Hub has spent months working with the Brennan Center to push for transparency and accountability from the MPD regarding their social media monitoring policies. Today we explicitly and publicly name MPD's use of social media as the weaponization of data.

Detroit: On a Journey to Be Seen

Detroit: On a Journey to Be Seen

After struggling for decades against pervasive narratives and disinvestment, Detroiters are making policy work for them.