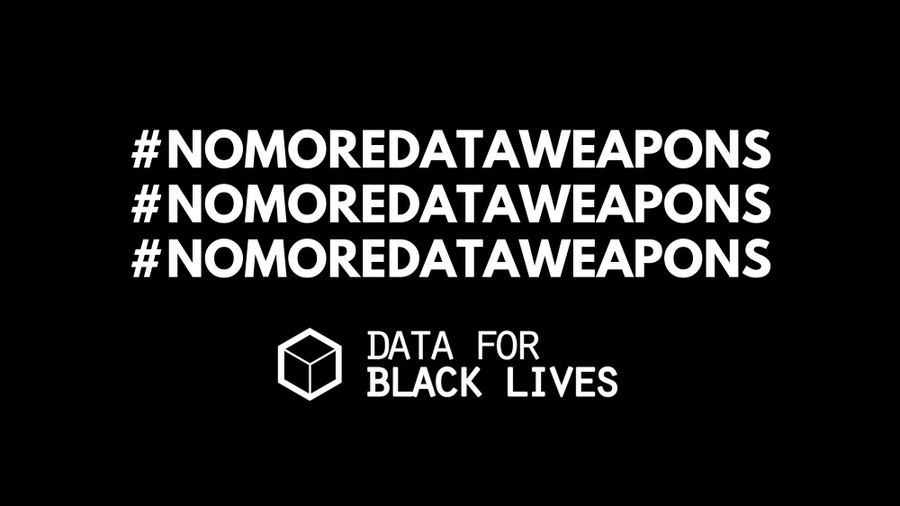 Data for Black Lives is a movement of activists, organizers, and mathematicians committed to the mission of using data science to create concrete and measurable change in the lives of Black people. Our blog aims to provide insights into our work by highlighting our research, organizing, and policy updates across all branches of our organization.

The term, Data Weapon, coined by D4BL founder and executive director, Yeshimabeit Milner, refers to any technological tool used to surveil, police and criminalize Black and Brown communities. There is a long history of these data enabled tools being weaponized against Black people. Data weapons are meant to augment or replace existing systems of surveillance, policing and criminalization of Black and Brown folks. In this way, these tools act as force multipliers that enhance the everyday racial terror of the criminal legal system. Data Weapons aggressively expand state surveillance efforts, exponentially increase the ability of law enforcement and state actors to relentlessly punish and criminalize Black communities, limit the movements of Black people, and effectively transform Black neighborhoods into zones of heightened patrol and policing, mirroring the prisons and detention facilities that hold millions of our people captive everyday.

#NoMoreDataWeapons is about increasing public awareness of the usage of Data Weapons and building collective momentum around policy fights against Data Weapons. Data for Black Lives is committed to a world where no more Data Weapons exist.

Law enforcement agencies are increasingly resorting to technology and data analytics to either supplement police patrol efforts or replace them altogether. Colossal in scope, the ecosystem of Data Weapons that is developing in the United States is intimately felt by Black communities on a day-to-day basis. Data Weapons are systems – and they do not operate in isolation, just as police and prisons exist for the purpose of protecting capital and maintaining the economic and political status quo. Given the prevalence and complexities of these systems, we need a widespread consensus around the dangers of Data Weapons in order to organize against them and we need collective action in order to hold folks accountable for deploying and investing in Data Weapons.

Today, it is estimated that over 100 million names are stored in criminal history databases. In some cities, 80% of the Black male population is registered in these databases[1]. Modern law enforcement agencies use technology and data-enabled tools to supplement or replace ongoing efforts. Recent coverage of law enforcement usage of tools like facial recognition has brought to light the prevalence of data weapons to surveill and control Black communities.

Some of America’s earliest surveillance systems can be traced back to the trans-Atlantic slave trade. Systems to maintain order and constantly collect information about enslaved people were used to neutralize collective action and thwart uprisings. The goal of early carceral and surveillance systems was to prevent enslaved people from having access to the full personal autonomy necessary to organize, escape or fight back against enslavement. Throughout American history, there is a continuous investment in systems meant to control Black people.

During Reconstruction, a set of laws known as the Black Codes used punitive measures to control Black people’s activities and prevented Black folks from gaining political and economic autonomy and the full enjoyment of liberty after slavery. For instance, under this legislation, white landowners would use data to calculate how much a sharecropper owed, keeping sharecroppers in inescapable debt so that many Black sharecroppers remained functionally enslaved.

Black codes were later replaced by the infamous Jim Crow laws which notably codified segregation and carried on the legacy of maintaining white supremacy and subordinating Black folks to limited freedoms and liberties. Beyond laws, wide-scale government spying efforts targeted Black communities. For example, in the 1950s, the State of Mississippi set up the Mississippi State Sovereignty Commission to spy and surveil Black leaders and communities in an effort to disrupt civil rights work. During the same period, the FBI started its Counterintelligence Program (COINTELPRO), which led to the domestic surveillance, intimidation, and discrediting of Black activists, community leaders, musicians, organizers, and the larger movement for civil rights.

#NoMoreDataWeapons demands that we highlight this historical context and stop this trend of surveilling, policing, and criminalizing Black communities.

With increasing calls to abolish and defund law enforcement agencies, we continue to confront the legacy of state violence targeting Black people. #NoMoreDataWeapons reminds us that we cannot replace one tool of oppression with another.

A word about scope:

We acknowledge that Data Weapons also exist outside the realm of policing. Data weapons are everywhere. Daily we witness the deployment of new data enabled systems weaponized in the economy, in healthcare and all aspects of life. We agree that FICO credit scores, the financialization of the economy through mathematical models designed to rob hardworking people of their livelihood; race-based risk calculators in medicine grounded in eugenics that send Black people to an early grave; and and social media ad delivery algorithms that send rental housing ads to Black people but homeownership ads to white people all constitute Data Weapons. Data Weapons are part of systems – they do not operate in isolation, just as police and prisons exist for the purpose of protecting capital and maintaining the economic and political status quo. We are vigilant in the fight against all data weapons, but our focus for now is on the use of Data Weapons in policing.

D4BL is working with Electronic Frontier Foundation (EFF) on collecting data for this campaign. Here is a working list of Data Weapons covered in the #NoMoreDataWeapons campaign. This list is not exhaustive and is meant to provide examples of the technologies and their use cases that we’re targeting in the campaign:

We are postponing the conference and will announce new dates soon. Thank you for your patience and support.

The state of California is the first and only state to have created a state body dedicated to the study and proposal of reparations. On January 27 I gave expert testimony on discrimination in technology to the California Task Force to Study and Develop a Proposal for Reparations at the first meet...

Data for Black Lives Statement in Solidarity with Palestine 🇵🇸

Data for Black Lives Statement in Solidarity with Palestine 🇵🇸

We at Data for Black Lives stand in solidarity with the Palestinian people and demand an end to Israeli Apartheid.

In this keynote address at the FAcct 2021 Conference, Founder & Executive Director Yeshimabeit Milner calls on researchers to do more than push for fairness, accountability and transparency-- but to demand justice, power and self-determination in the fight to make data as a tool for social chang...