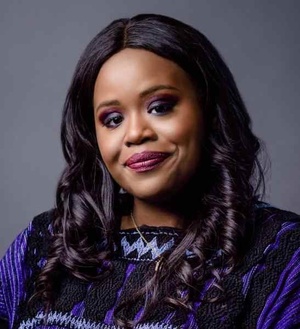 Yeshimabeit “Yeshi” Milner is the Founder & CEO of Data for Black Lives. She has worked since she was 17 as a movement builder, technologist and data scientist. She started Data for Black Lives because for too long she straddled the worlds of data and organizing and was determined to break down the silos to harness the power of data to make change in the lives of Black people. In five years Data for Black Lives has changed the conversation around big data & technology across the US and globally.

Yeshi has received much recognition for her work. She is an Echoing Green Fellow, an Ashoka Fellow and in 2019 became a Forbes Under 30 social entrepreneur. In 2020 she received a New York Times Good Tech Award for Data for Black Lives’s COVID- 19 database, and in 2021 was awarded the John F. Kennedy New Frontier Award, which recognizes leaders under 40 who have made significant contributions to politics and public service.

If courageously leading a movement to reclaim data was not enough, Yeshi is an adventure seeker and recently bungee jumped 341 ft. from the Victoria Falls bridge.

​​​​​Big companies are using data to preserve the power imbalance that keeps them rich. This economic model is rooted in chattel slavery and relies on the extraction and commodification of data.

Give Black researchers, data scientists and Black communities access to our data.

A call to action to dismantle the structures that concentrate the power of Big Data into the hands of a few and to put data in the hands of people who need it the most.

Data for Black Lives Statement of Solidarity with Black Minnesotans

Data for Black Lives Statement of Solidarity with Black Minnesotans

Abolition means the creation of something new - the history of big data and a prophecy for big data abolition.

At the Donald Bren School of Information and Computer Sciences Abstract: Bid Data is more than a collection of technologies, more than a revolution in measurement and prediction. It has become a philosophy, an ideological regime, one that determines how decisions are made ad who makes the,...

Since the advent of computing, big data and algorithms have penetrated virtually every aspect of our social and economic lives. New data systems have tremendous potential to empower communities of color. Tools like statistical modeling, data visualization, and crowd-sourcing, in the right hands, ...

We convened a roundtable of organizers, activists, and practitioners to discuss how we can organize, mobilize and coordinate in this moment and for the long haul. Together, we ask the questions - what does it mean for us to practice liberation in this moment? To demand and build the infrastructur...

On April 15th, 2020, Data for Black Lives hosted a virtual roundtable and pulse check for our movement in response to the COVID-19 pandemic. The roundtable features experts including Black epidemiologists who have been leading the research and efforts to change the conditions that make Black ...

Big Data is more than a collection of technologies, more than a revolution in measurement and prediction. It has become a philosophy, an ideological regime, one that determines how decisions are made and who makes them. It has given legitimacy to a new form of social and political control, one th...

In this keynote address at the FAcct 2021 Conference, Founder & Executive Director Yeshimabeit Milner calls on researchers to do more than push for fairness, accountability and transparency-- but to demand justice, power and self-determination in the fight to make data as a tool for social chang...

As algorithms and automated decisions continue to impact every aspect of our lives, in Black communities nationwide these decision-making systems animate already existing structures of oppression and inequality. From risk assessments to school enrollment algorithms to child predictive analytics a...

Amazon is selling facial recognition software to the police - here's why it matters.

Amazon is selling facial recognition software to the police - here's why it matters.

In a country where we’re still trying to end the dangerous culture of racial profiling - from Starbucks to student lounges to public spaces - we won’t allow one of the biggest tech companies to use their immense resources to fuel the incarceration machine. Facial recognition software is most...

Speakers will discuss algorithms, race, and justice–the problems and the possibilities.

Data, noun. Things known or assumed as facts, making the basis of reasoning or calculation. Data, often presented as objective and unbiased governs much of the public policy that affects the lives of poor people and people of color. Join this important discussion featuring activists and organi...

The state of California is the first and only state to have created a state body dedicated to the study and proposal of reparations. On January 27 I gave expert testimony on discrimination in technology to the California Task Force to Study and Develop a Proposal for Reparations at the first meet...

The Working Group of Experts on People of African Descent public session Data for Racial Justice will be held in Geneva from 25-29 March 2019. This thematic session will involve specific focus on its mapping exercise and bring together experts to discuss the human rights situation of people of A...

Datafication and Community Activism: Redrawing the Boundaries of Research

Datafication and Community Activism: Redrawing the Boundaries of Research

A workshop to held in the Department of Informatics, University of California, Irvine Irvine, California

We convened a roundtable of organizers, activists, and practitioners to discuss how we can organize, mobilize and coordinate in this moment and for the long haul. Together, we ask the questions - what does it mean for us to practice liberation in this moment? To demand and build the infrastructur...

States that are publicly reporting covid-19 cases by race

The Impact of COVID-19 on Black Communities

The Impact of COVID-19 on Black Communities

In this critical moment, COVID-19 data is being collected, released, analyzed, interpreted, and used to inform recovery and response efforts. D4BL has worked to consolidate state level data to explore the disproportionate impact of COVID-19 on Black people in the US. The D4BL COVID-19 Dataset cap...

This talk by Yeshimabeit Milner, founder & executive director of Data for Black Lives, serves as a call to action to reject the concentration of Big Data in the hands of a few, to challenge the structures that allow data to be wielded as a weapon of immense political influence. To abolish Big Data would mean to put data in the hands of people who need it the most.

What We Mean When We Say #AbolishBigData2019

What We Mean When We Say #AbolishBigData2019

Despite clear evidence that algorithms, models, and data schema serve as vehicles for bias, data-intensive technologies mediate more and more of our individual and collective lives (Noble, 2018). Datafication, the reliance on digital data and prediction to perform important, societal functions, n...

How can we claim agency over data systems to fight for racial justice? What is Data for Black Lives? How can you join the movement? To answer these questions and more we welcome Yeshi Milner to the show.